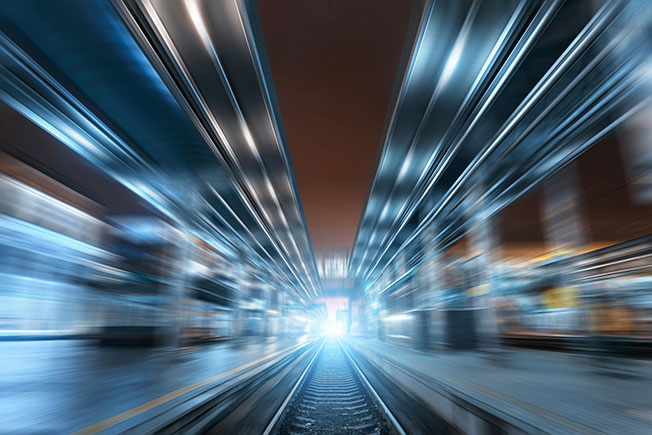 Railways have an extraordinary capability to transform geographical regions and even entire countries. The social, economic and political impact of a new railway should not be under-estimated. They transported the Industrial Revolution worldwide, spread economic development everywhere and were a ‘democratising force’ that has relieved many of tedious and hard labour, whilst diversifying across a broader range of products and services.

The opening of the Liverpool & Manchester Railway (1830) was driven by the need to carry raw cotton from Liverpool’s port to Manchester’s mills, but its primary innovation was that it carried passengers. In India, the motivating force was the need to get raw cotton to port in what is now Mumbai. The failure of the American cotton crop in 1846 pushed cloth manufacturers in Manchester and Glasgow to seek new sources, India being one. But to guarantee a steady supply, transport to the port at Bombay needed to be improved and so the cotton magnates pressured the British Government to build a railway.

The same pattern can be seen globally – the need to move workers to where they were needed for the extraction of raw material which then needed to be transported out of the country for sale or value-adding
processing. This process shaped the history of railways in many countries through encouraging trade by making it easier to import and export goods and raw materials because they could be moved from inland to the port and vice-versa. Numerous other benefits also appeared over time:

Railways make a major difference to economies and people’s lives
At a country level, railways help economies to prosper and diversify and build democratic institutions. The movement of people, goods and services helps industry and trade to grow which raises the demand for skilled labour and, in turn, the middle classes who tend to focus on Government and support greater democracy.

Many big rail projects in third world / developing countries are vital due to an inability to trade because they cannot move people, goods and services easily. In addition, they are often focused on a single commodity, for example, garments account for 80% of all Bangladesh exports. Making trade easier increases the flow of money that can then be used to diversify into other industries which, in turn, aids greater economic stability, i.e. the country does not fall into decline if one industry is in recession.

The commercial diversification being driven in the Middle East comes from the same concern – a single commodity, oil, is a short-term strength and long term (as it declines) weakness. These countries need more infrastructure than just pipes to maintain
their prosperity. In troubled areas (famine, drought, war and so on) investment in railways brings hope through real jobs that reduce unemployment and create greater social cohesion.

Our history gives us unique credibility
So, in a sense we have a duty to export our knowledge. After all, the UK’s unique mix of ageing and ultra-modern infrastructure means that engineers from the sector are in demand all over the world. Today the rail industry contributes around £9.3b to the UK economy each year with nearly one in five European passenger journeys taking place in the UK – we have the fastest growing rail network in Europe and highly regarded projects such as Crossrail prove, yet again, our high levels of experience and expertise.

A further example of our knowledge being in demand comes from the Office of Rail and Road (ORR) which has overseen programmes of sharing expertise on rail safety with many countries, in particular Dubai and Singapore. In a recent article, the ORR stated that sharing knowledge and experience is beneficial to both parties. However, it then transpires that despite acknowledging that this programme provides a showcase for UK rail expertise on the world market, exporting its skills is a low priority for the ORR at present. Looks like another missed opportunity.

Worldwide we are seeing signs that other countries believe that infrastructure, in particular rail, is a foundation to long term prosperity. Richard Vuylsteke, outgoing president of the American Chamber of Commerce, Hong Kong, recently said that the region should establish more physical infrastructure connecting it with Pearl River Delta cities to enhance its role as a link between international investors and southern China.

In addition, with the right transport links in place, Hong Kong is poised to benefit from growth in the Pearl River Delta area and China’s One Belt, One Road initiative, which aims to establish road, railway and other infrastructure projects linking and improving trade between China and more than 60 countries in Asia, Africa and Europe. “The key for Hong Kong to continue to attract international investors is to build more roads, railways and subways to link up Hong Kong with Macau, Qianhai, Shenzhen and many of the Pearl River Delta cities,” said Mr Vuylsteke in an interview with the South China Morning Post.

But we let others take advantage of our skills and resources
There are a number of factors that undermine our expert efforts and yet we don’t seem ready to acknowledge let alone address them.

First, foreign ownership. We seem very relaxed about the fact that 61% of UK manufacturing firms are foreign owned. In a recent interview, business minister Baroness Neville-Rolfe claimed that 320 UK manufacturing businesses (nearly two thirds of this sector) employing over 500 people are now owned by foreign companies, i.e. with over 50% of their shares in foreign hands.

This means that foreign ownership has jumped £167.7bn over this five-year period – from £760.9bn to £928.6bn. Looking at a geographical breakdown, North America was by far the biggest owner, with 46% of all foreign ownership, European investors owned 26%, while those living in Asia held 16% of quoted UK shares.

This means that decisions about the focus and priorities of UK companies are being decided in overseas HQ’s, automatically putting us at a disadvantage. Without doubt foreign investment is positive, but we should also recognise that many of these companies have a greater loyalty to the ‘home base’. Possibly a more centrally controlled sourcing and procurement process might ensure that these companies ‘feed’ their UK subsidiaries more actively.

Second, we let others get ahead. February 7, 2017, a train left Djibouti for the capital of Ethiopia, Addis Ababa. This was major news for the region as it is the first transnational railway in Africa and will cut the 4-day road journey to just 12 hours by train. The Prime Minister of Ethiopia, Hailemariam Desalegn, said, “This line will change the social and economic landscapes of our two countries.”

Of great interest, from our perspective, was the role of China, which designed the system, supplied the trains and imported hundreds of engineers for the six years it took to plan and build the 466-mile line. Plus, nearly all the $4 billion cost was financed by China. Source: Andrew Jacobs, The New York Times.

So where, we have to ask, was the UK?
Furthermore, China is designing its next generation of trains that can carry passengers at a top speed of 500 kilometers (310 miles) an hour and cargo at 250km/h, with wheels that can adjust to fit different track gauges used around the world.

Jia Limin, a professor at Beijing Jiaotong University has reportedly said that under an ambitious government plan starting this year, the country is developing trains that can run on a hybrid-propulsion system that allows higher speeds. Using the enhanced technology and expanded network;

“China will have the experience to operate high-speed rail networks in the world’s most diverse geographic and climatic conditions, from deserts to alpine plateaus to rainforests”, said Jia during an interview in Hong Kong. “That gives Chinese technology the unique ability to adapt to any condition anywhere in the world.”

Third, we don’t all play to the same rules. When it comes to winning overseas contracts, we are not on a level playing field. The reality is that many countries give funding assistance to companies chasing major projects which gain cheaper funding with fewer restrictive terms (they are more open to risks) and over a longer term – not 14 years, but the 25/30 years needed to depreciate the costs of the services. Reading the Government websites, the impression is that things are moving ahead well in terms of exports. The reality we encounter when discussing the above points is very different with every possible objection or reason for not doing something being placed in our path. The attitude seems to be one of preserving the barriers to business rather than looking for solutions.

In addition, there is considerable confusion over interpretations of the Bribery Act 2010, in particular as to what constitutes ‘Facilitation’. Perhaps this is naivety on our part, but many UK companies have been burnt overseas and consequently are now hesitant about expanding their international scope.
A five-point plan to grow UK rail exports
In this global rail market – 2017-19 forecast total market size: £128bn pa – it’s obvious that the rail industry should be capitalising upon the many opportunities it has to win new business.